Wearing a Steampunk Costume for Halloween

Are you intrigued by Steampunk and thinking it’s a cool look? If you’re not quite sure whether or not Steampunk fashion is for you then why not take advantage of Halloween to wear a Steampunk Costume?

If you do love Steampunk and you get really into the culture you’ll probably (if you have the time and skills) want to make a lot of your outfits yourself, but when you’re still in two minds about it I’d suggest buying a ready made Steampunk costume.

Having said that Steampunk costumes can still be added to and the accessories can often be worn with other outfits as well especially as Steampunk elements are becoming seen more and more in popular fashion as well.

First let’s look at some ready to wear Steampunk costume ideas for both Ladies and Gentlemen and then we can look at different elements for creating your very own Steampunk outfit.

Steampunk can be hard to define at times it’s one of those things that you know when you see. This makes it hard to come up with a ‘perfect’ costume, but that’s the whole point – steampunk can’t be pigeonholed very well. Steampunk has been called a lot of different things from Goth’s little sister to alternative history costumes etc, but in essence it’s based on Victorian Science Fiction even though the movement itself was ‘born’ in the 1980s.

Because Steampunk is inspired by Victorian Science Fiction it means that Victorian inspired costumes work really well for a basis of your Steampunk costume. This costume here is called a Steampunk Victorian Lady costume, but really, although I do love it, it just looks like a Victorian lady doesn’t it?

So how do we make it a Steampunk costume? Well because Steampunk is based in the Victorian era during the Industrial Revolution you actually could just leave it like that and feel that it’s fine.

Let’s look at what’s included in the costume first before we look at ways to add to it – the dress and jacket is included. The dress has a slender bustle, but is more in line with the later Victorian era than the 1860s era bustle and the jacket has puffed sleeves which we started to see emerging during the 1890s and into the Edwardian period of the early 1900s.

Obviously one way to add a cheeky touch of Steampunk fashion to this outfit would be by adding some cool boots. Now some plain black lace up Victorian coal mill style boots would be fine or you could add a pair of boots like these below instead. 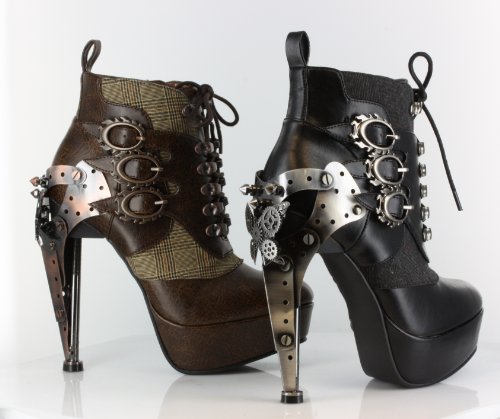 These are what I call a statement pair of booties and although they are partly based on Victorian ankle boots they certainly have some attitude attached which is perfect for the punk part of Steampunk!

They have a definite Steampunk flavour in the heel with a metal heel and cogs on the top of the heel this should leave people in no doubt that your costume is Steampunk as opposed to Victorian!

There are lots of other ideas for Steampunk footwear which you can look at in more detail on another page – Steampunk Shoes | Steampunk Boots.

Now on the site that sells this costume they recommend adding a pair of goggles to be worn casually around the neck, along with ruffled lace gloves and a cool little hat that makes me think of the Edwardian era (where Steampunk also gets a lot of influence from).

There are lots of components that go into creating a perfect Steampunk outfit and they include – hair, hats, jewelry, skirts or cullottes, corsets, jackets or other accessories.

There are lots of different ideas for how to wear your hair from very traditional Victorian styles to apocalypse style dreadlocks and more, in fact I’ve even dedicated a whole post to different hairstyles –

Depending on the hairdo you decide upon you may, or may not want to wear a hat. There are a few different ideas on the ‘hair’ post linked to above and I’m sure I’ll write more about different Steampunk inspired hats at a later date.

A skirt is a very important part of the Steampunk costume and usually it is a skirt that’s worn, but the adventurist side of Steampunk means that an alternative could be cullottes. Most Steampunk cosplayers seem to go with a late Victorian style of skirt, although I have seen shorter skirts used really well. Wide legged cullottes with a Victorian/Edwardian style riding jacket can look very adventurist as well which I believe is what Steampunk is all about.

Wearing corsets on the outside is something that you certainly wouldn’t have seen in the Victorian era, but it is a big part of the Steampunk look – obviously it’s showing what they think ‘punk’ ladies would wear at that time! There are lots of different styles of corsets available and I think that you could plan your whole costume around a favorite corset it you wanted! I’ve actually composed a post about Steampunk corsets so rather than rehash them all here I’ll point the way for you – Steampunk Corsets.

When it comes to a jacket some people choose not to use one or to simply add a bolero or shrug to the outfit in order to show off the corset more. A jacket can be a great addition to an outfit though and there are a lot of different choices to choose from including a Victorian riding jacket, aviator jacket or simply a military style jacket.

Next it’s the addition of accessories such as some gorgeous Steampunk jewelry (which I love because you can wear it with your everyday clothing as well), goggles and Steampunk weapons.

Victorian fashion for men is definitely the basis for any great Steampunk outfit, but it’s the eccentric touches that can really transform your outfit to a fantastic costume. First you need to decide what sort of Steampunker you want to be – a scientist, explorer, aviator, etc this will help to decide what pieces you can add to your outfit to really sell the Steampunk influence.

Let’s look at some costume building blocks for you to choose from.

First we’ll look at a costume called Steampunk Jack and discuss the elements of the costumes and things that could be added to make it even more ‘Steampunk.

The costume also includes the ornately decorated vest which appears to be of a gold paisley pattern and a white jabot tie – very gentlemanly indeed.

Not included in this costume is the hat and goggles which I think is what really signals it’s a Steampunk costume and not a Victorian gentleman’s costume.

The touch of gold in the costume design mixed with the goggles will transform you from a mere gentleman to a Steampunk adventurer on his way to the airship ready to do what he must in the name of science and discovery!

As with all genres there’s more than one style of Steampunk costume available for men and this next image is of a more rakish looking gentleman, don’t you think?

This was available as a costume to buy, but unfortunately seems to no longer be available, but the elements are certainly worth us looking at and dissecting… This costume is very neo-Victorian in style and provides a great foundation for your Steampunk costume. Again it doesn’t include the hat and glasses shown here which I feel are a big part of what makes this a cool Steampunk outfit.

What it does include is the shirt, vest and pants.

I do love the combination of the striped blue pants and the distressed brown vest with an almost pirate inspired ‘puffy’ shirt as it gives a real sense of adventure to it.

The vest is the best part of this costume in a distressed brown with the black straps and all of the D rings attached, what is deceptive is the cogs that show up when you look closely at the outfit. These are brooches and a necklace and aren’t included – I think it could work without the brooch, but it certainly looks good with it. It does show you that you could convert any vest into a Steampunk inspired one with the right Steampunk jewelry however.

One thought on “Steampunk Costumes”